The experts say children mimic their parents. It is true. Our children are watching closely, taking in our actions, thoughts, and opinions. What does parenting have to do with Canon, you ask. It’s a bit of a long story but I think you’ll like it 😉

It all started when I found a camera bag on a deserted country back road. Inside were a Minolta 35mm, two lenses, and a few colored filters. No ID, no houses or even cars around, it was mine and all it took to get me rolling! Being interested in shooting cool pictures, I started by experimenting with all of the settings. My favorite subject was my oldest and only son, at the time. Thinking back, what a trip it was to focus with that dinosaur. It seemed like a hundred setting changes and then “Oh Crap” I missed the shot! This was a rather costly way to learn about photography, libraries books are free, duh. The photo hobby went by the wayside amidst my relocation; at some point during my messed up divorce, the camera was sold.

Some years after my second son was born, hubby bought me the latest Canon SLR camera. Knowing how I enjoyed taking pictures, he chose the Rebel EOS-F1 thinking it would be perfect. He was so right! Two sons involved in sports presented great photo ops. This time I read the basics however, being a hands on person I have to admit I did more experimenting than reading. If it were not for the Rebel and my 80-200 zoom lens NO photos of my oldest son’s graduation ceremony would even exist. Thanks to Canon, Mom got her photos ha!

Thinking I mastered the Rebel, which I really didn’t, I moved up to the Elan 7 model. Oh gosh, the possibilities this Canon camera offered were overwhelming. In fact, much more camera than I ever needed or wanted. At the same time, my youngest son (aka Red) was in the play offs. The team was to play in the National Pop Warner Super Bowl held at Disney’s Wide World of Sports in Orlando. 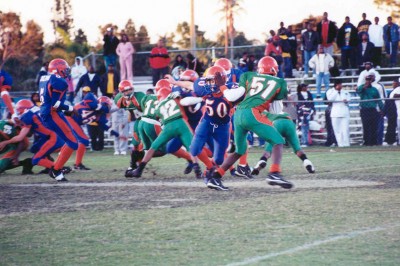 Being the “team photographer” so to speak, I contacted the local paper to request a press pass. Without one, there would not be entry to the sidelines. The Cape Coral Breeze granted my request in exchange for the photos. How exciting!!! Not only were Red and the team competing in Nationals for the first time in league history but also I would be there on the side lines with national sports journalists and photographers from ESPN!

For those of you who follow college football, Noel Devine starting running back for the WV Mountaineers was on the team. Noel, Red, and many of the other starting players made the front page of the newspaper that week! 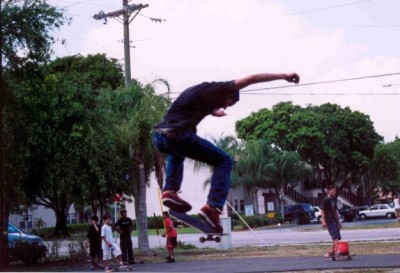 Remember these are film shots scanned into the computer. Quite different from digital shots that are easily retouched. Back in day that was done by pros.  From Pop Warner I moved on to shooting skateboard competitions and metal shows. Of course, Red was participating and all the while watching mom rather closely.

In 2007, I would buy another Canon camera, the 20D. Before the purchase, I called Canon directly for some guidance. You see Red chose to study photography and this camera was an expensive one. Canon was extremely helpful and mindful of the purpose. It was comforting to find they did not recommend something more expensive or elaborate. The 20D went through several car accidents and a ton of college parties and keeps on producing great shots.

After trying Red’s 20d out, I really wanted a digital camera. Therefore, I added the Power Shot A550 point and shoot to my collection. Affordable, with fast and easy shooting plus it takes video clips, perfect for my current lifestyle.

Fast forwarding to 2010: Red holds an Associate of Science degree in digital photography. His equipment is Canon: 20D, 50D, and about $5000 in Canon lenses plus every accessory you can image. Two weeks ago, my dear son arrived in London to further his education. His goal is to achieve a BA in visual communications.

Canon Rocks, did I not support my views on that… I’m just sayin’

And I found some great prices on Canon cameras particularly point and shoots.

Diet Pills – Are You Serious Saturday