Is the Social Media Landscape Influencing your Family? 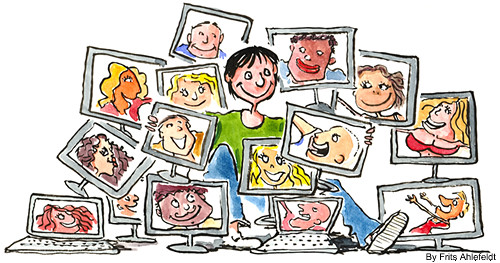 Social media seems to be just about everywhere these days. Whereas people used to stand next to their friends and chat with them, now they’re deciding how many of the ten different bands on Myspace they want to allow to friend them. And how long has it been since people sent their messages through a phone, using that antique thing people used to call “their voice?” These are just the possible musings of people who predate the current fixation with social media and excessive reliance on technology. Let’s take a look at some of the new realities that social media is imposing on family life.

Consider how about only ten years or so ago, kids used to beg their parents for cell phones. Do not feel old if you can remember when they used to beg for pagers – that was only 20 years ago. But now, it seems like the latest smart phone grows out of a child’s hand around the age of 12. Consider how much more open it makes communications between parent and child when they can message one another through their social networks of choice at will. Parents cajole and badger their children until they are friends on Facebook, and then communication becomes more than just texting them when it’s time to come home.

Through social media, a kid can arrange a lot of things without arousing any overt suspicions. But whenever someone writes something on the kid’s profile wall, it’s in full view of the parents. But if the kid decides not to have a wall, that can also arouse suspicions of its own accord. The whole thing is a slippery slope.

Consider how much kids used to be able to hide from their parents, simply through not talking to them. The party coming up in a few days that’ll certainly involve no supervision and tons of substance abuse? Unless there’s a very strict code of silence or some excellent euphemisms bandied about, parents have a leg up on finding out about it that they never would have had in the past. And once something like that has happened, the kids had better disavow it Mission Impossible style, or the pics of them draped over the toilet with the shot glass still in hand will be seen sooner or later.

Basically, parents can spy on their kids in a way parents of the past would have killed for. But of course, the parents themselves had better stay beyond reproach, unless they would like a “good for the goose, good for the gander” style of argument when they bring up a child’s less-glorious deeds.

Granted, parents will probably only tweet “business appropriate” things. But kids who tweet (which isn’t too popular yet, but may grow in popularity down the road) will probably end up saying the darnedest things. Consider what would happen if a parent had access to their kid’s random thoughts and recent activities (that they’re trying to brag to their friends about) 24 hours a day. While you might not be this connected yet, technology follows a familiar path: “Wait a few minutes, and everything will change again.”

Blog with Integrity AND Buy Groceries?