Oatmeal is one of my favorite grains. A bowl of hot oatmeal topped with farm fresh butter and a sprinkle of brown sugar is a cherish childhood memory. My boys enjoyed oatmeal as an afterschool snack topped with bananas. Of course, living in Florida they preferred the cold cereal variety. One of my favorite bread machine recipes is this Country Oatmeal Bread. In fact, oatmeal graham piecrust, created by my friend Catherine, has become a standard for my peanut butter pie! 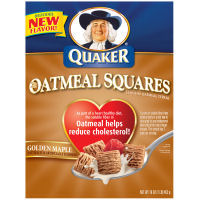 The Clever Girls Collective teamed up with Quaker Oats offering members to sample their Brown Sugar Oatmeal Squares.  Free breakfast , yay! The newsletter read, “Everyone who signs up will be sent a free sample, but the deadline is TONIGHT, April 29, at 8 p.m. PDT or 750 Clevers, whichever comes first.” As you would expect, my reply was a jubilant yes! Several weeks later, the plain white box arrived with two samples of Quaker Oatmeal Squares, oh yummy!

Experts recommend eating at least three one-ounce equivalents of whole grains, or 48 grams daily, based on a 2,000-calorie diet. Quaker Oatmeal Squares has 46 grams per serving. Did you know that one serving of Oatmeal Squares contains 1 gram of soluble fiber from oats? Dieticians and medical professionals believe three grams of soluble fiber from oatmeal in a diet low in saturated fat and cholesterol may reduce the risk of heart disease.

In 1877, Quaker Oats registered as the first trademark for a breakfast cereal. Four years later, Henry Parsons Crowell buys the bankrupt Quaker Mill in Ravenna, OH, and the brand name Quaker. Quaker Instant oatmeal was introduced in 1966. Oatmeal Squares launched in 1988. The Quaker Oats Company submits a heart health petition to the FDA 1995 for consideration. Approval was received the following year. In 2007, Quaker celebrated its 130-year anniversary, wow!

These lovely, delicious little squares of oatmeal goodness are available in three delicious flavors: Brown Sugar, Cinnamon, and Golden Maple. The brown sugar variety is wholesome and tasty, with the ideal level of sweetness, and a powerful oatmeal flavor. The aroma of oatmeal traveled the moment I opened the box. “I can smell that oatmeal out here,” hubby called from the family room.

These crunchy little pillows are truly bite size. The oatmeal squares are not big and bulky like so many of the fiber rich cereals I have consumed. Moreover, they are the perfect size for younger children. These are a great snack alternative to potato chips or other high fat crunchy snacks.

For me crunchy food presents a big problem these days. Midlife has proved to be a challenge for my teeth. I know you are probably thinking, just add the milk and wait silly woman. Of course, I added milk and intended to allow the cereal soften. Waiting, I began wondering if I would end up with a bowl of cold oatmeal rather than soft oatmeal squares. Much to my surprise and delight, the bite size cereal was soft yet the edges retained an enjoyable mild crunch; not mushy in the least and the perfect crunch level for my old choppers!

Quaker on the Web

Thank You to Clever Girls and Quaker for the free breakfast! BTW – All opinions are 100% mine and I was not required to write a review in order to receive the yummy Quaker Cereal samples!