UPDATE: Since upgrading to the 2.1.0 version of MobilGo, my connection is constantly being lost. Once lost, it will not reconnect without first resetting the usb connection. Quite aggravating! Troubleshooting included verifying the latest drivers were installed, uninstalled the app on the phone and re-installed. I even uninstalled the program from the PC. All with no success. Customer support suggested I buy the Pro version, nope if the free version doesn’t work with my Samsung Galaxy SII, chances are the Pro won’t either.

MobilGo is still great for backing up and I like the option of saving as a text or xml file. In all honesty, it has become useless to use for text messaging in lieu of my phone which was the most productive feature for my work .  The constant connection loss is not only frustrating but slows my production!

The MobileGo app for Android Phones is an application that allows windows computer users to interact with many aspects of the Android phone. One major difference to other applications is that it runs on the pc rather than the phone. As such, MobileGo is a life saving business tool for this midlife woman.

You see most of our business’ daily communication is achieved via text messaging. Vision begins to decline at middle age and extensive smartphone viewing causes major eyestrain! Currently, 11,316 text messages are stored on my phone. Those vital jobsite notes, photos, and schedules must be documented to the respective pc files as well. Sore eyes, double documenting, and lengthy searches became radically frustrating. Friday was the last straw. Get over your midlife self – you own a smartphone, there has to be a solution!

“Just Plug in and Go.

Frustrated by flipping through your smartphone to try and keep track of files on a four-inch screen? Had about enough of randomly losing data? MobileGo gives you a simple, smart interface to plug in and go. It instantly recognizes and remembers each Android device you insert. Backup your whole device with a click, delete duplicate files, export/import media and contacts between your device and PC, and much more. It’s a bird’s eye view of your phone – your life, so you can get more done!” 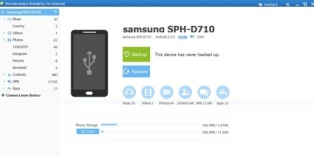 Easy Download and Install
The pc software and app are free. Download the app from Google Play or the AppBrain Android Market and follow the simple on screen installation instructions. Trust me, the install would have been canceled if the interface were complicated to install and understand.  Need to work on a different PC or laptop, download the interface tool directly from the developer, Wondershare.

Once installed, connecting is effortless via the phone USB or WIFI. I prefer the WIFI connection. Simply open the app, tap connect then scan the onscreen bar code. A permission box pops up to allow the smartphone connection. Your phone is now visible and manageable from your PC.  In addition, your phone works as normal while MobileGo is running too.

MobileGo Features for the Middle Aged
The text messaging features are undoubtedly my favorite.  Highlight any text conversation and save it to the PC as text file. Search messages for specific words or phrases in all conversations. Highlight a specific text message to forward, copy, or delete with just one click. Moreover, I can see what I’m doing!
OMG this app turns your phone into a PC! Last Friday I was trying to communicate job information to someone with limited English skills. It was Google translator to the rescue. Translated the message in Chrome and pasted it into MobileGo; click, sent, understood! Tasks such as translations would never have been attempted with my phone. 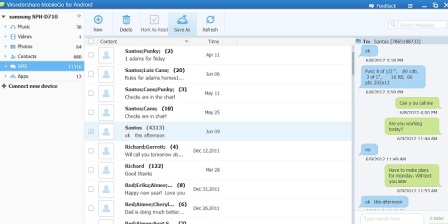 MobileGo provides far more than simply transferring music, movies and pictures. Move contacts, music, videos, and photos back and forth between the smartphone and PC. Pictures received via text must be first saved in the phone for MobileGo to access them. Subsequently, any picture saved on the phone can be saved on a PC.

The ability to add folders in which to organize your photos and other media is an awesome feature. Oh boy, I had photos in far too many places prior to discovering MobileGo. Perhaps technology limitations are a typical midlife attitude and storage disarray is a common occurrence, I don’t know. Are your photos neatly organized in your Android phone? Mine are now. 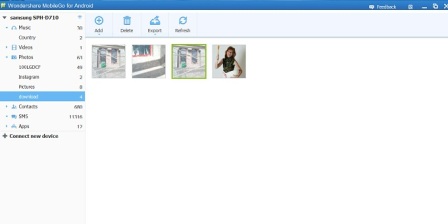 Frustration due to a two-hour search through 10,000 text messages forced me to “rise above” those midlife technology limitations. It is truly amazing how apps and technology improve ones daily life. My midlife attitude has changed. Utilizing more of my phones features is energizing. Overcoming my eyestrain is refreshing. Increasing productivity is revitalizing. Discovering MobileGo is priceless!

Does your midlife attitude influence your life’s productivity?  Do you have a favorite app that improves your small business or daily life?